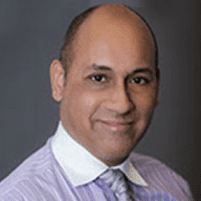 Double board-certified pediatrician and internal medicine specialist David Rubio, M.D., F.A.A.P., has cared for patients in Northern Virginia for over two decades. He is part of the Virginia Pediatric Group team and sees patients at the practice’s location in Aldie, Virginia.

Dr. Rubio was born in Queens, New York, although he considers South Riding, Virginia, his hometown. He completed a six-year biomedical program with Union College in Schenectady, New York, earning a Bachelor of Science in 1987. He completed his medical degree in 1989 at Albany Medical College, also in New York. He then went on to complete his internal medicine/pediatrics residency training in 1993 at the North Shore University Hospital/Cornell University Medical Center in New York.

In 2016, Dr. Rubio and his practice joined the Virginia Pediatric Group. He feels it is wonderful to watch the children he's cared for over the years grow and develop. The personal relationships made with families have been extremely rewarding, and he looks forward to doing the same for many years to come.

Dr. Rubio is fluent in Spanish and resides in South Riding with his wife and three children. In his free time, he enjoys sports and music.